Coffee and Chocolate with Shark Mountain 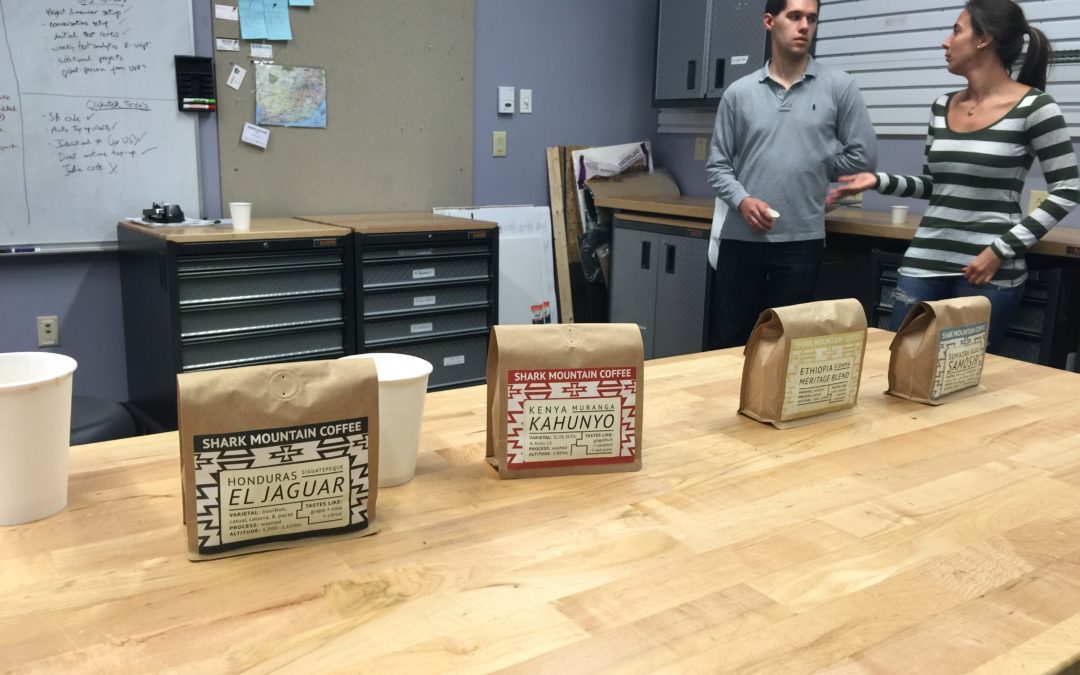 Many of my MBA for Executives classmates do not live in Charlottesville. It’s unfortunate because they miss out on a lot of local opportunities through Darden clubs. I joined the Darden Military Association (DMA), Darden Technology Club, and the Darden Wine And Cuisine Club (WACC) and today got to attend my first WACC event. Darden Dean Scott Beardsley joined us at the iLab for a coffee and chocolate tasting with Jonny Nuckols, founder of Shark Mountain Coffee in Charlottesville.

Jonny came to Charlottesville via Delaware–a mathematician whose Charlottesville coffee lineage includes Shenandoah Joe, Para (Grit Coffee), and Millie Joe–opening Shark Mountain at iLab coinciding with the 2013 launch of the entrepreneur incubator. Shark Mountain later added chocolate, and I’ve been buying them around town at MarieBette and Timbercreek Market. After roasting cocoa to make his own mocha sauce for the coffee shop, Nuckols decided to make chocolate bars in early 2014. Shark Mountain has also grown to a second location, opening a coffee bar at the Studio Ix co-working location beside the Ix Art Park.

But this session was about tasting, not about how Shark Mountain grew as a business. We spent a little over an hour doing blind tastings of four chocolate bars and four coffees. I think the most surprising part was how each chocolate bar derives its flavors from the cocoa bean fermentation and the roasting process, not from added ingredients or flavoring. The chocolates are made of just cocoa and sugar, often just enough to remove the bitterness and roasted for shorter times than most chocolatiers to bring out the unique flavors. The tasting notes listed on the bars come from taste tests of each new batch, called “Beta Bars” that sell at a discount after each new batch is completed.

The coffee tasting was a bit more difficult to pinpoint the flavors. What I found interesting was Jonny claimed coffee has more aromatic and flavor compounds than either chocolate or wine… something I never realized. He went into more detail about typical flavors of the beans based on the origin. As with the cocoa, Shark Mountain uses only single-origin coffee beans versus blends so each bag of beans, or each coffee brewed, stays true to its geographic origin.

This group of WACC members (and the Dean) got an afternoon pick-me-up from a mind blowing tasting of @sharkmountaincoffee chocolate and coffee. We will never be able to eat a simple Hershey bar again.