In January of 1999, I stood at Trevi Fountain, turned my back to the majestic pool and threw a U.S. quarter over my shoulder. I guess the tradition worked as I finally found myself standing at Rome’s Termini train station around 2pm on Thanksgiving Day. My parents and sister were going to fly into Rome in about 24 hours and to accommodate them, I booked rooms at a nicer hotel in East Rome, but since I was by myself on day 1, I checked into the Rome Holiday hostel a few blocks from the train station, dropped off my bag, and hit the town.

One of the things I’ve always loved about Rome is how a simple walk around town is like walking through a museum. On my last trip to Rome, I had the long tour of Vatican City, a quick walk through the Roman Forums and Colosseum, and plenty of time to discover the Pantheon and pizzas for three days. My goal on this trip was to see one or two new things, spend more time at the Forums, and have the opportunity to welcome my sister and parents to Europe.

A view of the Capuchin Crypt — photo credit Wikipidia

From my hostel, I walked west toward Piazza Barberini to the Church of Santa Maria della Immacolata Concezione (Via Venito 27), home of the Capuchin Crypt. For just 6 Euro and thirty minutes of my day, I learned about the Capuchin friars through a multi-room museum of artifacts and historical displays. Of course, nobody goes there for that. The Capuchin Crypt beneath the church is about a 120-foot hallway with multiple crypts decorated by thousands of bones of friars from the 16th to 19th centuries. I had heard of the crypt ahead of time and knew I wanted to see it, but it was less shocking than I anticipated and a much quicker tour than I had planned.

I spent the next few hours walking Rome before ending up at the Spanish Steps and seeing so many people, I remembered it was Thanksgiving and kind of longed to be with Americans watching my beloved Green Bay Packers. I quickly googled Thanksgiving in Rome from my cell phone and saw an advertisement for the Highlander Pub’s Thanksgiving feast. I had met a few Americans in Siena that mentioned the Highlander Pub, where they had played beer pong just five nights earlier. I worked my way to the pub only to realize they were fully booked for the feast, but I made my way onto their waiting list. Fortunately, I got to participate and then spent the next seven hours eating turkey, watching football, and partying with a bunch of Americans. After the slower nights of Siena, I quickly realized Rome’s nightlife was definitely a bit more exciting! But after carrying a drunk paratrooper to a taxi at 1am and then making the long walk back to the Roman Holiday hostel, I also remembered that I am not as young as I used to be! 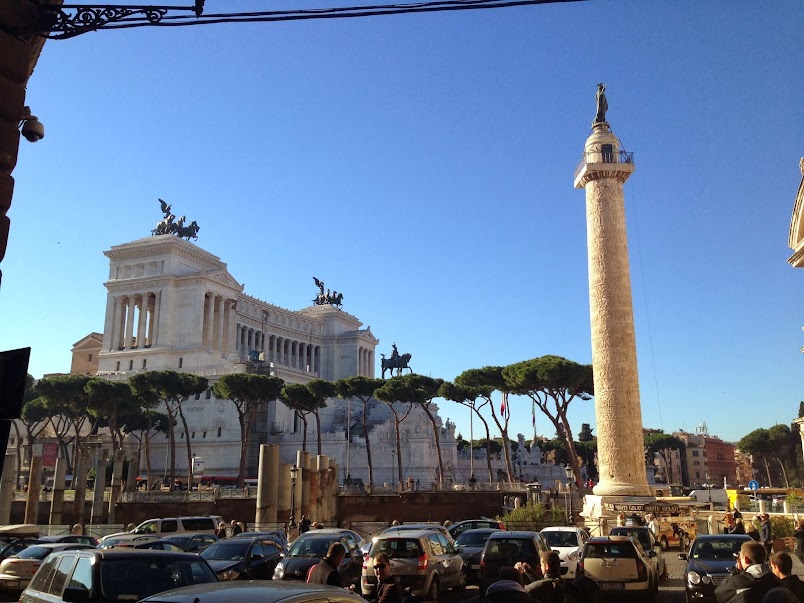 I walked down to Piazza Venezia, took a few snaps of the Vittorio Emmanuel II Monument, enjoyed a coffee along Via Battisti, then walked along Via dei Fori Imperiali toward the Colosseum. By now, it was getting close to my family’s arrival so I made my way up to Hotel Quirinale for check-in. We met around 2pm, got cleaned up and unpacked then headed right back out for a walking tour of Rome and the Pantheon. Over the next few hours, we walked toward the Spanish Steps at Piazza di Spagna, browsed the shops of Via Condotti, visited the Galleria del’Alberto Sordi, and threw our coins into Trevi Fountain, the 18th century Barouque tribute to Triton and the Roman aqueducts. We continued past Piazza San Ignazio along Seminario emerging at the two-thousand year-old Pantheon. We completed our long walking tour at Piazza Navona where we sat outdoors at a restaurant serving traditional Italian pastas and cheeses with a bottle of Chianti Classico. 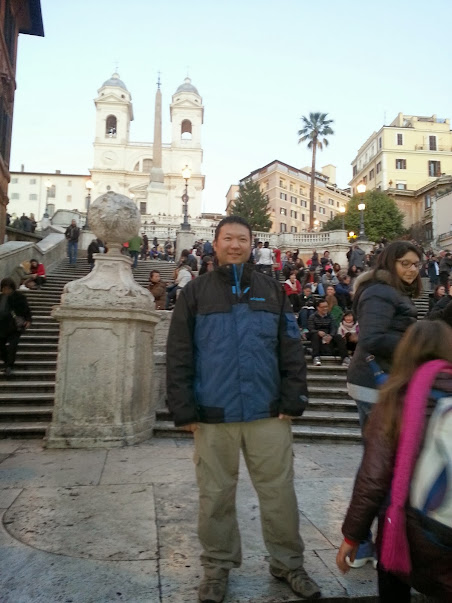 Hanging at the Spanish Steps

For my family, the day of traveling and walking had taken its toll so I put my parents in a taxi back to the hotel. My sister and I walked a bit more and at the prodding of the Americans I had met the night before, we returned to the Highlander Pub to participate in their pub crawl. However, nobody showed up and I was actually a bit relieved because I don’t think I had fully recovered from my previous hangover! 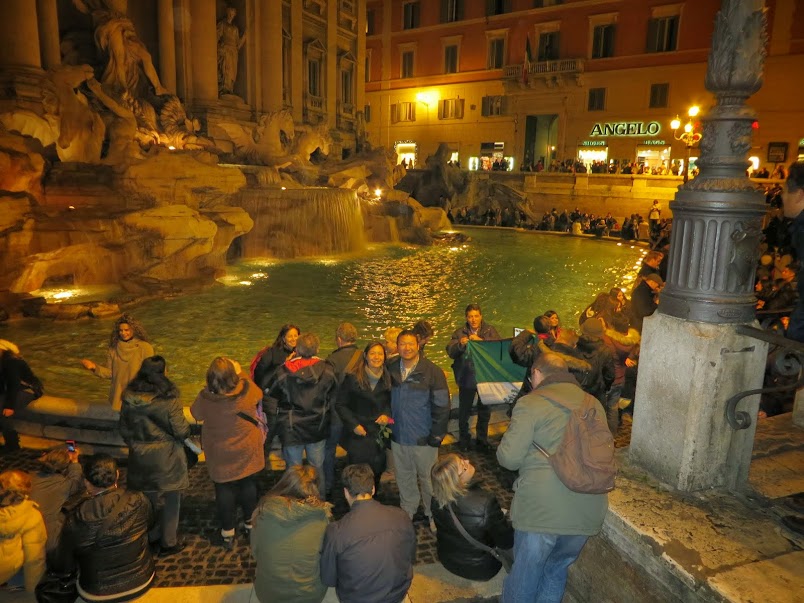 My sister and me at Trevi Fountain

Day 3 – The day of the official tours

While my original lone-traveler plan was to avoid the Vatican, I couldn’t let my parents visit without a proper tour. I also had no intentions of hiring a guide to see the Forums, Colosseum, or any of the rest of Rome as there’s so much readily available information on everything online, but I didn’t want to play tour guide for my family. After a few hours of research on TripAdvisor, I decided to contact Easitaly Tours and after two or three emails, I had arranged for a guided tour of the Vatican and other key sites of Rome in a private Mercedes tour van. I had absolutely no regrets by the end of the day. 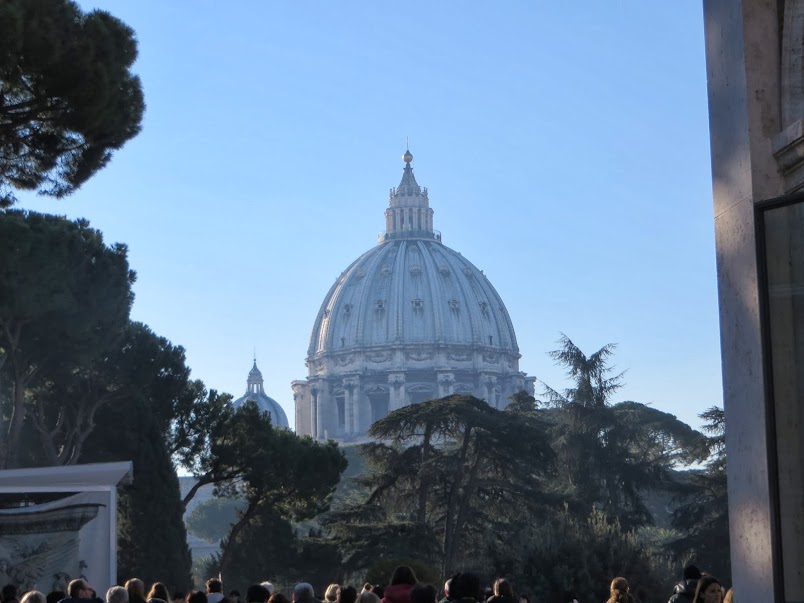 Antonello Ceccarelli picked us up right on time at our hotel and we made our way toward Vatican City with commentary on our surroundings as we drove. Outside the entrance, we met our Vatican tour guide Maximus, an older, charismatic gentleman with over 19 years experience giving tours of the Vatican museums, Sistine Chapel, and St. Paul’s Basilica. For the next three hours, we were treated to amazing commentary, expert historical context, and hilarious conversation. Without going into too much detail of what we witnessed during our tour, I will just say that I highly recommend anyone visiting the Vatican to hire a guide (and of course I highly recommend Easitaly Tours). Having a guide will ensure shorter lines, quicker access to the most important artifacts, and the guarantee no amazing collection at the Vatican goes unnoticed. 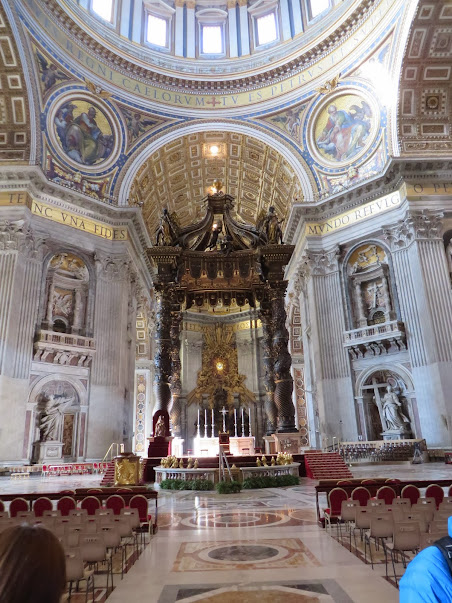 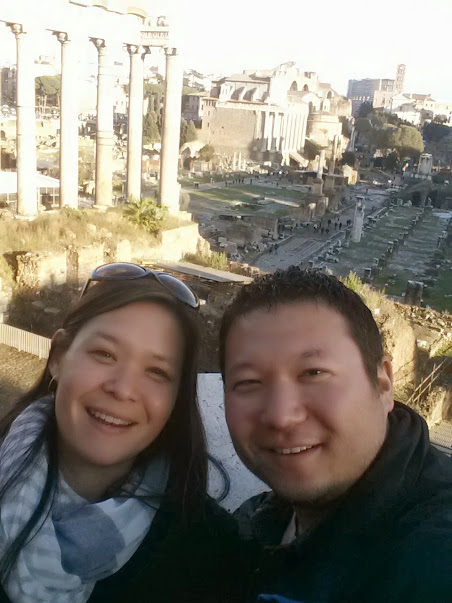 My sister and me overlooking the Roman Foru s

We met Antonello near St. Peter’s Square and after a quick lunch, we were off to see the sights of Rome. Our tour winded through the streets of the old city and included a full list of must-see Roman sites such as Castel Sant’ Angelo, Piazza del Popolo (including the Church of Santa Maria del Popolo), the mausoleum of Ceasar Augustus, Piazza Navona (including full narration on the Four Rivers Fountain and the former Stadium of Domitian which occupied the location in the 1st and 2nd centuries), Pantheon, and the Vittorio Emmanuel II Monument. Based solely on time remaining, we decided not to do a guided tour of the Roman Forums and Colosseum, but Antonello did drive by the area and tell us a little bit about the history. The great pace of talking while driving and spending time walking around the sites was a near perfect mix. I can’t say enough good things about Antonello and Easitaly Tours!! 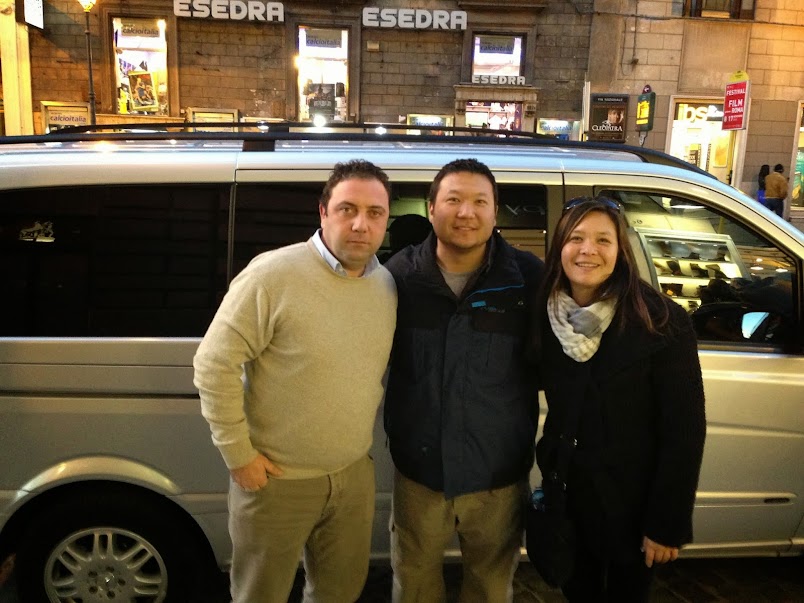 Antonello dropping us back off at our hotel… it’s a horrible picture of him, he’s really much happier in person 🙂

I’d love to say we spent the evening doing something really cool, but the truth is, we were exhausted! So we enjoyed a good dinner and then played cards in our hotel room all night!

With a lunch-time train to catch, we decided to spend the morning walking around the Colosseum and Roman Forums. Of course no trip to Rome is complete without this little tour, and we easily did it by ourselves in about 2 hours. There’s not much to say about this… I highly recommend doing some background reading on the area before going to see it. This is one spot that having a professional tour guide could be very beneficial and educational. For us… it was just a great time for photos! 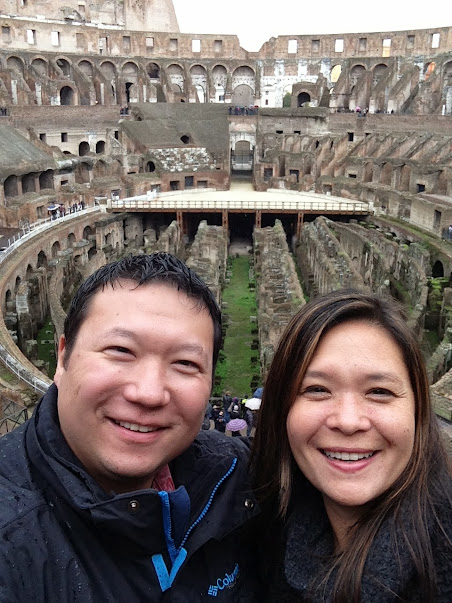 My sister and me at the Colosseum 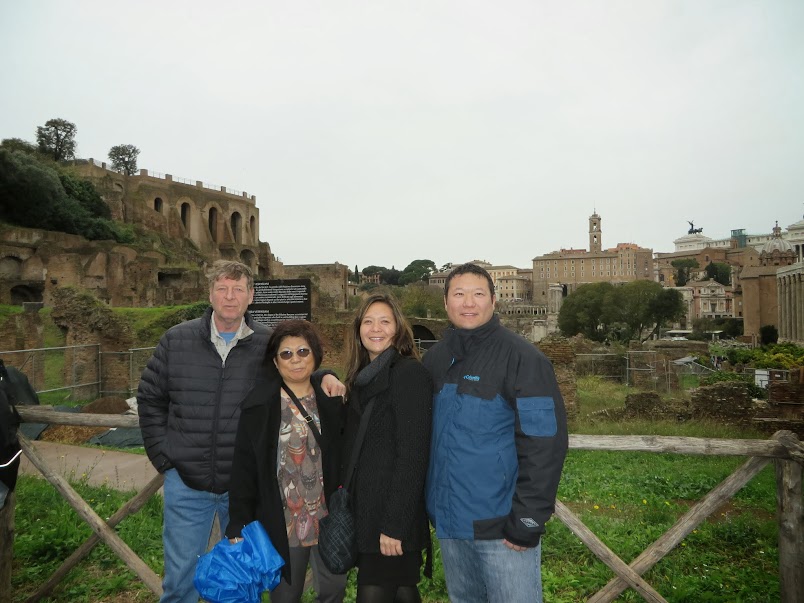 My parents, sister, and me at the Roman Forums