Growing up in Northern VA, I have many memories of trips to Luray Caverns… I’ve probably been there between 7 to 10 times, but not since maybe 1990. I was really excited last weekend when my wife and I were trying to think of things to do and she mentioned Luray Caverns. As it turns out, she has been driving to Harrisonburg every Monday through Thursday this summer to take our son to a camp at JMU and she passes a few signs for the caverns in Stanardsville and Elkton. I thought it was a brilliant idea and even suggested we then drive south along the Shenandoah National Park’s Skyline Drive… yet another thing I loved as a child but have not done with my own children since moving back almost three years ago. 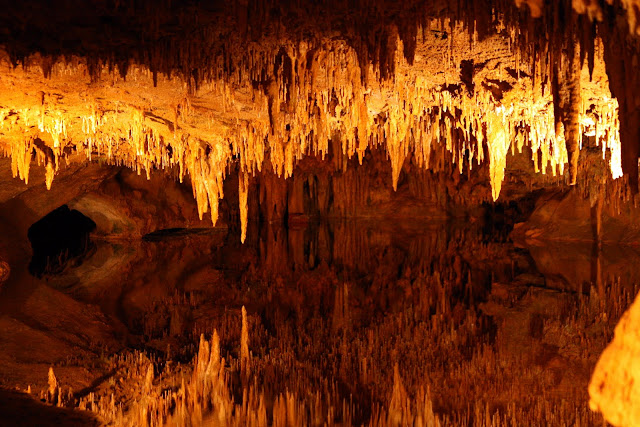 The crystal clear reflection of the cavern ceiling on Dream Lake

Luray Caverns was discovered in August of 1878 (99 1/2 years before I was born) when a Luray, VA, tinsmith’s candle was blown out by a cold wind coming from the hillside while his party was actively searching for caves. The group of four descended into the cave by rope and used candles for light and their first glimpse was of the massive Washington Column, still the main focal point as you enter the caverns today. The men discovered what would later be revealed as the largest cavern system on the East Coast. 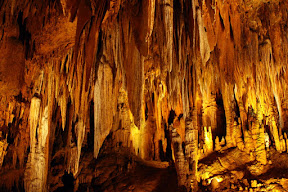 Tourism to the caves began immediately as well as the admission charge. To celebrate the many means of travel used to reach the caverns, the facility also has a car and carriage museum, started in 1957, that is included in the price of admission. Visitors will notice that the tour area within the caverns are brick and concrete… first poured in the 1950s. In 2000, they added a garden maze which looked like it may be fun, but it was nearly 100 degrees and required an additional fee. I had never seen it before though. Then across the street, and also included in the price of admission, is a small museum dedicated to life in the Shenandoah Valley.

The caverns get over a half a million visitors a year so you won’t have a private, quiet tour. However, our tour was self-paced with tour guides standing at each main feature, repeating their speech every 10 to 15 minutes. We spent about one hour walking the caverns and that was with a 7, 6, and 3 year old going at their own pace. It is easily walked by children (even though I remember having some pretty sour feet at the end when I was a kid, mine never complained once on their first visit). The one disadvantage: it’s costly. We spent $68 for our family to go with our youngest being free. But you can research that using Luray Cavern’s Plan Your Visit website.

See my complete album of our trip to Luray Caverns 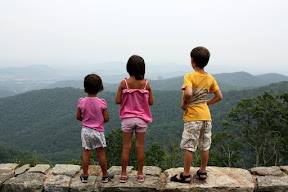 Our drive home was along the peaceful Skyline Drive. I have a lifetime access pass so we get to drive on the road for free, but normally it costs about $15 a car I believe. The kids enjoyed the view and we stopped at a few observation areas for pictures and so that the kids could climb on rocks.

See my complete album of our drive down Skyline Drive