The garden is kicking out the vegetables now and since we are not skilled at preserving any of it for later use, I had to come up with a way to use five aging cucumbers! I decided to work on perfecting one of my favorite Korean side dishes (or banchan 반찬), cucumber kimchi (오이 김치). There are many variations of this recipe and many call it cucumber stuffed (sobaegi) kimchi (오이소박이 김치). For those not famaliar with Korean food, kimchi is an ancient staple of the Korean diet usually made from cabbage fermented with red pepper paste (고추가루) and a host of other ingredients.

So this is a simple recipe. I’m definitely not a chef and not an expert at Korean food, but here’s a recipe that I have no problems with and gives a wonderful, tasty result! 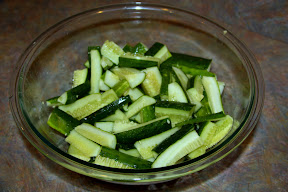 Step One:This is all about the cucumbers. Most prefer to use Kirby cucumbers, but any will do just fine. I like to cut mine into wedges, but you can also slice them width-wise if preferred. Put them into a glass bowl and sprinkle sea salt over them and lightly mix it up. The salt will draw out excessive moisture from the cucumbers and make them crispy. They need to sit for at least 30 minutes, but preferably overnight. 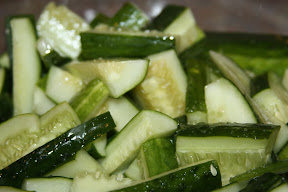 Step Two:After the cucumbers have sat, you should have a small pool of water forming at the bottom of the bowl. I use a salad spinner, but all you really need to do now is rinse off the salt and remove as much water as possible from the cucumbers. This process makes the cucumbers salty as well so you don’t have to add additional salt later in the process. Keep the cucumbers separate and now gather the remaining ingredients. 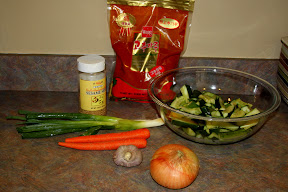 Step Three:I don’t have exact measurements here, but I try to judge it based on the number of cucumbers I used so that the cucumbers make up about 70% of the mixture. You’ll need roasted sesame seed, green onion (or chives), carrots, garlic cloves, onion, and red pepper powder (available at most Asian markets or online if needed) 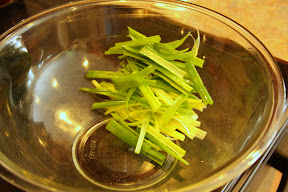 Step Four:Wash and then thinly slice the green onion or chives. I cut them into two inch segments and then slice them lengthwise twice. You can do this any way you like of course. Add them to a large glass mixing bowl (I suggest glass because if you use plastic, it will likely stain a bit red when you add the red pepper powder). 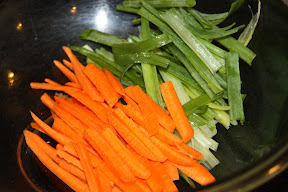 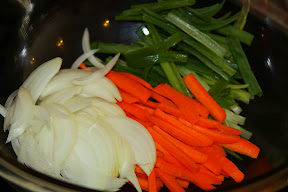 Step Six:Using regular onion is optional but I like what it adds to the taste. I slice them lengthwise. For this amount, I used half an onion. Add them to the large mixing bowl. 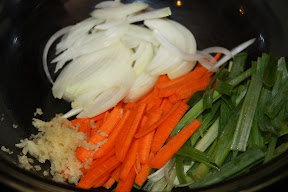 Step Seven:Mince some garlic. I did three cloves and one was really big. Garlic is kind of the magic behind most Korean food so I highly suggest using the real thing instead of garlic powder. Add it to the mixing bowl. 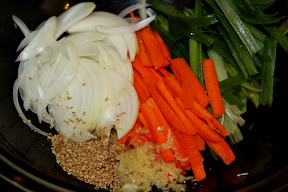 Step Eight:Throw a handful of roasted sesame seed to the mixing bowl. 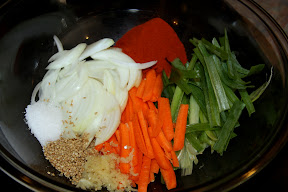 Step Nine:I added a tablespoon of salt and two tablespoons of red pepper powder, but I highly recommend skipping the salt (see step two). I will not be using it in the future as my mixture was just a bit too salty. So, add the red pepper powder to the bowl. If you really like spicy, add another tablespoon. 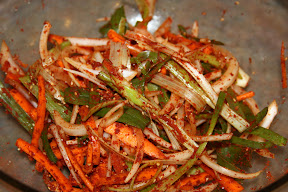 Step Ten:Time to get your hands dirty, My mom and grandma (Halmoni) always use those disposable kitchen gloves, but what fun is that? I just dig in and mix it all up. Be sure to split the onions into individual pieces if they were stuck together and do your best to evenly distribute the garlic, sesame seeds, and red pepper powder. 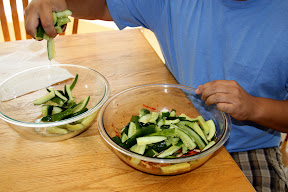 Step ElevenMove the cucumbers over to the other bowl draining any water from them as you go. We’re almost done here! 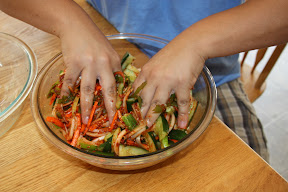 Step TwelveHere’s those disposable gloves may come in use… especially if you have cuts on your hand as the red pepper powder is a bit spicy! But once again, I dug in bare handed. Mix it all up thoroughly and evenly spread all of the ingredients. 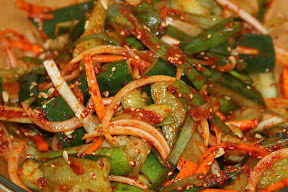 Step ThirteenYou could theoretically eat this now, but I wouldn’t. I would cover it (or jar it) and put it in the refrigerator for at least 30 minutes before eating. The longer it sits, the more it ferments and the taste will change. Some people prefer fresh kimchi (like me) and I try to let it sit overnight and then eat it within two days. Others, like my wife, like it to sit for a week and then indulge. This is obviously up to you!